…sort of. Have you been paying attention to the cronut sensation in NYC? A cronut is a doughnut-croissant hybrid created by chef Dominique Ansel and sold exclusively at his self-named bakery. They sell out in minutes and he only makes maybe 200/day. You can read more about his cronut if you’d like.

As the story goes, Mr. Ansel has trademarked the term cronut (good for him) so anyone else who attempts this baking phenomenon must come up with their own name. Well, our new local Whole Foods has started selling them (as well as a few other around the Boston area), so naturally we had to try one immediately – if there is a food phenomenon my husband and I are there. Whole Foods calls their creation a doughnut croissant – not totally original, but that’s ok. 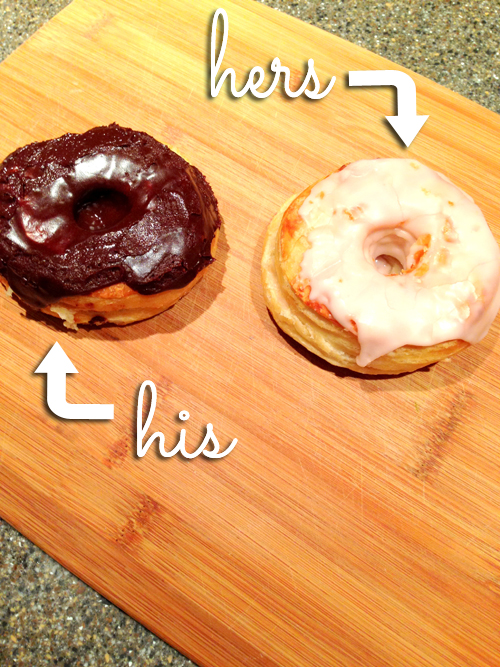 There were three flavors to choose from: Chocolate Hazelnut, Boston Cream, and Raspberry. For us I bought the Boston Cream and Raspberry. I like their take on this decadent pastry, both flavors we got had a light filling in the center. And let me tell you: these. are. yummy. I bought them in the morning but we ate them that evening – I think they’d be even better eaten fresh right after they’ve been made.

Just look at all those flaky layers! And you know how we feel about croissants.

Bottom line: what an AWESOME idea to make a doughnut-croissant hybrid Mr. Ansel – bravo! And thank you local Whole Foods for hopping on the bandwagon.

4 thoughts on “We Tried A Cronut”