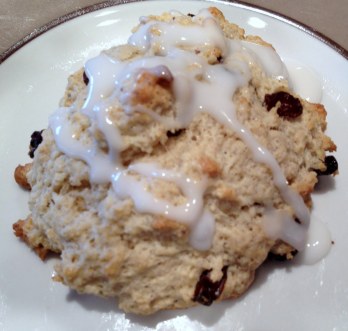 When my husband and I were first “officially” living together, we found this recipe one Sunday morning in the Boston Globe food section, tore it out, and have made these numerous times since. I thought it was about time I share with you! They are so yummy, especially with the sweet glaze on top, perfect for a lazy, chilly, weekend morning with a hot cup of coffee!
Cinnamon-raisin Biscuits
from the Boston Globe, March, 2005

Heat oven to 400 degrees. Have a heavy baking sheet on hand.

In a mixing bowl, sift the flour, baking powder, salt, cinnamon, nutmeg, and sugar. Add the butter, and using two blunt table knives or a pastry blender, cut the fat into the flour until it forms pearl-sized pieces. Crumble the mixture between your fingertips for half a minute to break down the fat until the mixture looks somewhat coarse. Stir in raisins.

In a small bowl, combine the eggs, cream, and vanilla. Pour the cream mixture into the flour mixture. Use a blunt knife to stir gently until the mixture forms a dough. Lightly knead the dough in the bowl for 30 seconds, then turn out onto a floured surface.

Shape the dough into a thick disc about 6 to 6 1/2 inches in diameter. Using a chef’s knife, cut the disc into 6 even triangles (we just form them into rounds, but do what you want). Arrange them 3 inches apart on the baking sheet. Bake for 15 to 17 minutes or until the rise and set. Glaze when warm.

Mix until desired consistency is reached